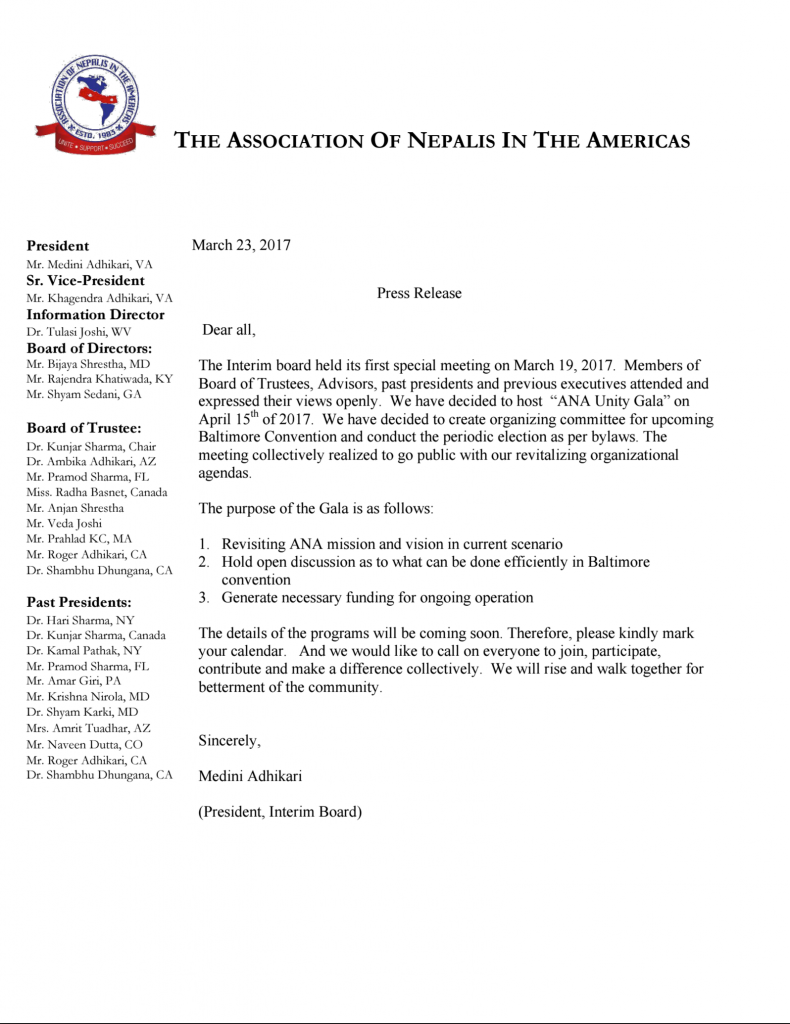 In light of the unprecedented natural disaster taking place in Nepal, The Association of Nepalis in the Americas (ANA) regretfully announces that the 2015 July 4th Convention, scheduled to be held in Long Beach, California has been cancelled.

The difficult decision to cancel the annual gala, following over three decades of ANA tradition, was made by the ANA board in an emergency meeting held on May 14.

The resolution to cancel the convention came with heavy heart, yet we are convinced it is a right decision under the tragic circumstances when the energy and attention of Nepalis living around the world being focused to cope with the unimaginable earthquake costing over eight thousand lives, sixteen thousands injuries and over half million homes.

We believe that at a time of the ongoing national tragedy all community resources: people and otherwise, must be channeled to support the relief efforts to help victims and not get distracted by any other community events.

While, new date and scope of the 2015 convention will be decided in the near future, ANA will be organizing a broad vigil and earthquake relief fund-raiser campaign on July 5th in Santa Monica, California. The details of the program will be provided in coming days.

In the meantime, we want to inform you that ANA has been working hard with various Nepali and American entities and individuals in raising fund for earthquake victims, as well as, developing plans towards the long term reconstruction and rebuilding (shelters and homes) for the 2015 Nepal earthquake victims

To learn more about this press release or on ANA’s overall direction to support Nepal earthquake relief mission, please contact us at [email protected]

Finally, ANA apologizes that the decision to cancel the convention may cause inconveniences to some who have already bought the plane ticket. In that case, you may want to come to Los Angeles anyway and enjoy the city, as well as, join us at the vigil on July 5th.